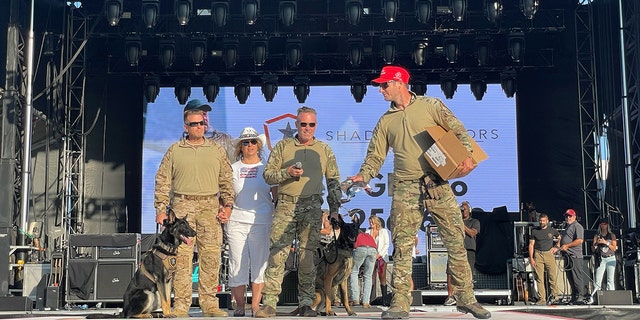 The owner of Baden K9, which specializes in breeding and training of family home protection dogs, said their phones have been ringing “off the hook” with questions from families, teachers and communities about using specially trained dogs for protection in schools.

Joshua Perry, the owner of Baden K9, said his phones have been ringing “off the hook” due to an increase in violence and shootings in schools, and the dogs he trains can be an asset to protecting families and students.

Perry added as demand has increased, he has spent time educating families and schools on the benefit of using specially trained dogs for protection.

“The dog is a great deterrence, it has detection capability, and it has containment capability. So it carries all three forms of security and goes where man can’t,” he said.

“If you look at the dog, as far as its ability to be able to deter that evil threat that we have in our school systems… that same dog can welcome a hand of a child that is anxious or cautious to rejoin or go to school,” Perry said, adding that a dog can also detect and deter bad actors in schools.

Despite this increase in demand, though, Perry said he believes people are playing “catch up.”

“It’s a great liability, and there’s going to be great accountability for people that don’t respond to this and protect our people,” he said. “We’re dealing with time, and time is not always a friendly thing to deal with.”

Perry said that dogs could be implemented in every school across the country because “they are the greatest deterrents.”

US MARSHAL, K-9 WOUNDED DURING SHOOTOUT IN CHICAGO: REPORT

In the 2020-2021 school year, there were 93 school shootings at K-12 campuses in the United States, the highest number since the federal government began tracking the data about 20 years ago, according to a report by the National Center for Education Statistics. Deaths resulted from 43 of those shootings, while the other 50 caused injuries.

Kelsey Koberg is an Editor with Fox News Digital. Story tips can be sent to [email protected] and on Twitter: @KelseyKoberg.