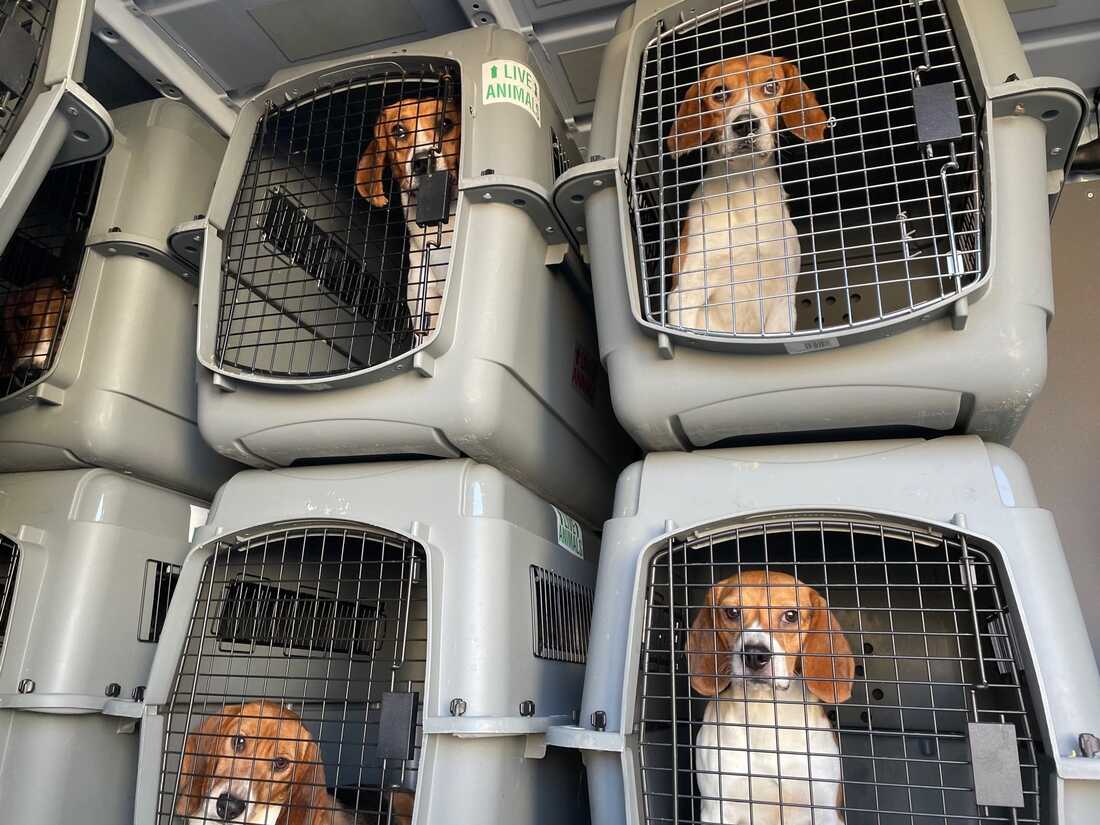 These canines are some of the nearly 500 beagles that Homeward Trails Animal Rescue collected earlier this year from an Envigo research facility in Virginia. Now Homeward Trails is taking in additional beagles from Envigo, which bred the dogs for pharmaceutical research, after a federal judge ordered thousands of remaining dogs to be released.

These canines are some of the nearly 500 beagles that Homeward Trails Animal Rescue collected earlier this year from an Envigo research facility in Virginia. Now Homeward Trails is taking in additional beagles from Envigo, which bred the dogs for pharmaceutical research, after a federal judge ordered thousands of remaining dogs to be released.

Several animal rescue organizations across the U.S. are racing against the clock to rehome approximately 4,000 beagles from a research facility in Virginia.

The Humane Society of the United States is working with the U.S. Justice Department in spearheading the effort to transfer these dogs from their current home to shelters in a matter of weeks.

The Envigo facility, which bred these beagles for pharmaceutical research and testing, was found to be in violation of several federal regulations. The beagles were found this year in horrendous condition, according to U.S. Agriculture Department reports.

At least two inspection reports revealed that the facility “performed unnecessarily painful medical procedures on dogs and puppies — including euthanasia without a sedative.” That’s according to Sens. Mark Warner and Tim Kaine of Virginia, who publicized these reports this year. Other reports revealed that dogs were held in sweltering shelters for hours and that research at the facility “caused distress” to nursing dogs and their puppies, the senators said in a March news release.

Authorities intervened, and last week a federal judge ordered thousands of these remaining dogs to be released. Federal authorities now have just 60 days to rehome these animals.

Saving thousands of dogs is a “daunting” task

An Envigo beagle saved by Homeward Trails this year. The rescue group is working on saving hundreds more.

Rescue organizations from California, Wyoming, Virginia and elsewhere are preparing to take the first batch of dogs next week. Each organization is taking on a monumental level of work and expenses to help.

“It’s one of the most daunting rescues that I’ve ever heard of or have had the privilege of being involved in,” said John Ramer, the executive director of the Kindness Ranch Animal Sanctuary in Wyoming. Ramer’s organization rescues all types of animals that were previously used in scientific research and testing.

“When I carry one dog out of a facility, I can tap it on the head and give it a hug and tell him that everything’s gonna be OK,” he said. “But pulling 4,000 out … it’s an inconceivable number of dogs.”

Ramer’s group purchased a $65,000 van in order to fit in 32 dogs for one trip from Virginia to Wyoming. He said Kindness Ranch will likely have to take five or six trips to bring back as many beagles as it can.

The group is also looking into leasing property in Texas to give more beagles space to rehabilitate, he said.

Homeward Trails Animal Rescue in Virginia has been working with other beagles rescued earlier this year from the Envigo facility.

Homeward Trails signed an agreement with Envigo earlier this year to take in 500 “surplus” beagles that the company could not properly care for because of COVID-19, according to Sue Bell, the executive director of Homeward Trails.

The group was able to take those dogs in and find foster or adoptive homes for them by May.

But this current collection of 4,000 more dogs from the same facility is a whole new ballgame.

“It’s taking a lot of phone calls right now. And a lot of emails,” Bell said of the effort to prepare. “I went to bed last night with 100 emails and woke up to 800.”

Because the Virginia base for Homeward Trails is not far from Envigo, Bell’s group is planning to take a good number of pregnant dogs and puppies that are still nursing and are unable to travel far.

“Adult dogs will be spread out a bit further just because it’s safer,” Bell said.

One of the beagles from Envigo that was rescued by Homeward Trails this year.

Bell says a number of people heartbroken by these dogs’ story and interested in taking them in have contacted her.

But it will take some time before these dogs are ready for their new forever homes, Bell and Ramer said. Each animal will likely have to undergo some sort of medical treatment, including getting spayed and neutered.

Others may also have bigger, as well as more expensive, health problems to deal with, she said.

“It will cost somewhere between $275 and $700 for us to get each beagle ready for adoption,” Bell estimated.

Aside from the younger pups that will likely be ready to be adopted sooner, older dogs from the facility will be more undersocialized. This means everything in their environment could be new and really overwhelming to them, Ramer said. Even the sound of a vacuum cleaner or TV is something these dogs have to get used to.

“It takes a little bit of time to condition them to get used to home life environment,” Ramer said.